In order to live out femininity and sexuality Heinrich Habitz from Ludwigsburg chose a life as a sexworker and called himself Liddy Bacroff.

He was raised by his grandparents. Joseph Habitz, his mother’s future husband, adopted him. Classed as having ‘difficult’, he was put in a correctional home for a year. After breaking off a business course he worked in an office and then as a messenger boy. Several previous convictions for property offences and trespass are documented for the 1920s and 1930s. In 1924 the 16-year-old was sentenced to six weeks’ imprisonment for an offence under § 176 subparagraph 3 of the Reich Criminal Code (RStGB) by the Ludwigshafen district court; the sentence was later remitted. In 1929 the Mannheim district court gave him a two month jail sentence for ‘unnatural sex acts’ under § 175 RStGB. In November 1929 Habitz left his parents’ house for good and moved first to Berlin and then to Hamburg. From then on, in the Hanseatic city Heinrich Habitz called himself Liddy Bacroff.

Another two-month prison sentence followed in 1930, this time because she had stolen women’s clothing from a roommate. In June of that year she was sentenced to one month in jail for trespass. The next court case was in May 1931: Liddy Bacroff was given four months’ imprisonment for homosexual acts under § 175 RStGB. In 1933 and 1934 she was given two sentences for theft in connection with sex acts and ‘unnatural sex acts’ and sentenced to six and ten months’ imprisonment.

During her prison terms in 1930 and 1931, Liddy Bacroff wrote several texts about her emotional life which provide a good insight into the life of a transvestite. The texts bore the titles Freedom! (The Tragedy of a Homosexual Love) and An Experience as a Transvestite. The Adventure of a Night at the Adlon Transvestite Bar!

In March 1936 Liddy Bacroff was sentenced for the first time under the new § 175a subparagraph 4 RStGB, which made ‘prostitution’ a punishable offence, and for theft by the Hamburg regional court to two years in jail and to the loss of civil rights for three years. She served her time in the Bremen-Oslebshausen prison.

What had happened? In December 1935 a sailor had gone to the police and reported a prostitute for theft. Police investigations found that Liddy Bacroff was the only possible suspect. Her arrest took place in January 1936. During questioning she made the following statement: ‘I admit to the theft of 20 RM in the Herrenweide. Its my opinion that the man did not know that I am also of the male sex. Rather he will have assumed that intercourse was with a woman. Since my release I have lived from unnatural sex acts. I did not have stable employment and I also didn’t receive any help from public funds. I met my punters in St. Pauli. I usually received 2 to 3 RM for each job. On average this meant my daily earning were around ten Reichsmarks. I lived in different places, usually only for a day or two. I also went there with my punters. I don’t know the names and addresses of the people any more. I had only been living with Schmidt (No. 11 Seilerstraße) for two days.’

This from the report by the assistant police investigator on Liddy Bacroff: ‘On the homosexual disposition of Habitz it should be said that the seeds of his abnormality can already be observed in his youngest years. He preferred to play with dolls, as his behaviour matched just that of a girl. Lipstick was indispensible to him in his ‘vanity’. At the age of 16 his homosexual nature was awakened. His emotional life can be compared to that of a woman. He never had the urge to live his sexual life as a man. The description of ‘Mann-Weib’ [literally: ‘man-woman’] aptly characterises him.’

After release from prison in January 1938, Liddy Bacroff probably registered her residence at no. 3 Davidstraße in the St. Pauli quarter. In order to avoid continual police surveillance, she used falsified registration papers to move to 78 Eckernförderstraße (present-day 79 Simon-von-Utrecht-Straße). This led to a police search for her using wanted posters.

Liddy Bacroff’s freedom only lasted two months before she fell victim to a denunciation on 25 March 1938. At 11.15pm the police were ‘reliably informed that in the ‘Komet’ bar … there was a man in women’s clothing sitting at a table with another man’. The two were then arrested. Liddy Bacroff stated that she wore women’s clothing ‘from an abnormal disposition in order to obtain clients on a homosexual basis’. Her companion explained that he had known nothing of the true identity of Liddy Bacroff and had believed he had met a woman. During questioning on 2 April 1938 she provided the criminal investigator frank information about her life thus far as a transvestite: ‘I was given permission for it by the police authorities. So I could move about in women’s clothes. But at the same time I was watched by the vice squad. […] My passion for men ultimately drove me to prostitution. I find sexual satisfaction, where there is love for my partner, through anal intercourse. […] Up to today I have earned a living through prostitution. […] In the period after serving my sentence until my arrest, i.e. from 15.1.38 to 25.3.38, in these 9 weeks I had around 3 men per day. On average they paid me 3 RM. Sometimes I would even get as much as 10 RM from a punter. In most cases I met my gentlemen on the street (St. Georg); rarely in a bar. Sometimes I would approach the men, sometimes the other way around. After we had agreed on the price we would go to the Kucharsky guesthouse, on the corner of Hansaplatz and Bremerreihe. The guesthouse owner knew that I was a Mannweib.’

On 4 April 1938 Liddy Bacroff submitted a request for ‘voluntary’ castration in order ‘to be cured of my sick passion which has led me onto the path of prostitution’. She was subsequently examined by a medical examiner from the Hamburg Health Department. In his report, the doctor came to the following conclusion, which was equal to a death sentence: ‘H. is a transvestite to his core. Accordingly his entire habitus is feminine and infantile, the voice eunuchoid. […] As Uranian = rent boy = passive pederast he will probably continue to operate after his proposed castration, since in lacking the loftier emotions the immorality of his actions, e.g. earning money though passive pederasty, as a rent boy, cannot be made comprehensible to him. He is happy in his situation and has no thought of earning his living in a respectable manner through work. […] Hence there is already a permanent fixation present in him, i.e. the routine: the sexual-criminal habitual form. […] Preventative detention is necessary given the absolutely unfavourable prognosis. As a personality of the form described he is and remains without doubt a corrupter of morals of the worst kind and must therefore be removed from the ‘Volksgemeinschaft’ [‘people’s community’].’

On 22 August 1938, Liddy Bacroff was sentenced by the Hamburg regional court to three years’ imprisonment with subsequent preventative detention for ‘prostitution with unnatural sex acts’ as a ‘dangerous habitual criminal’. This from the verdict: ‘The court has ignored the castration suggested by the accused himself, […] because […] according to the expert evaluation, this measure is clearly unsuited to having a decisive influence on the sex life of the accused. There is even the danger that the castration of the accused would even facilitate his criminal urges. It would make it even easier for him to hide his genitals from his sexual partners. It is clear that he made this request himself with this consideration in mind. For in the same breath he explained to the expert that, they couldn’t close up his anus after all.’

Following imprisonment by the Gestapo and remand in custody, Liddy Bacroff was transferred to the Bremen-Oslebshausen prison in October 1938 and, after serving her sentence, was admitted to the internment facility in Rendsburg in October 1941. In November 1942 she was handed over to the Hamburg police authorities and subsequently deported to Mauthausen concentration camp, where Liddy Bacroff was murdered on 6 January 1943. 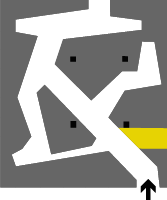